We have got these questions a lot from our customers regularly, and it’s easy to confuse LM80, LM79, and L70 or assume they test the same measure in an LED product. Although all of them are used when discussing LEDs, they are not related measurements.

Understanding LM-79, LM-80, L70 can help you evaluate LED products. Learn why LM-80 matters and how the data can be used to improve your bottom line. So what are the differences between them?  This post will give you a detailed explanation.

LM-80 is a method for measuring lumen depreciation

LM-80 refers to a method for measuring the lumen depreciation of solid‐state light sources, such as LED packages, modules, and arrays. Before the advent of LM-80, LED component manufacturers each reported lumen maintenance data using their own disparate and varied systems.

To avoid customer confusion, members of the Illuminating Engineering Society (IES), came together to create a standard methodology that would allow customers to evaluate and compare the lumen maintenance of LED components from different companies. LM-80 was born.

LM-80 testing should be performed by EPA recognized Laboratories. Only reports from recognized laboratories are relevant. This standard is used for the Department Of Energy (DOE) ENERGY STAR program early qualification in conjunction with other reports.

The testing report issued according to a standard format will provide luminous flux for a given current over a 6,000 hours period with interval measurements. Luminous flux will be measured for 3 different LED case temperatures: 55ºC, 85ºC and a third temperature to be selected by the manufacturer. Besides, the lumen maintenance, the chromaticity shifts over the measured period.

Typically, LED chips are tested for 6,000 hours and extrapolated until they reach L70. LM-80 determines the rated life of the LED module, but not the life of the complete LED product. Other components, such as drivers, electrical connections, product integrity, etc. may fail before the LEDs.

It is the Illuminating Engineering Society of North America (IESNA) approved method for the Electrical and Photometric Measurements of Solid-State Lighting. It measures an LED luminaire or integral lamp as a whole system according to a standard process using specified equipment.

LM-79-08 testing should be performed by EPA-Recognized Laboratories for the category of the product tested. Only reports from recognized laboratories are relevant. This standard is used for the Department Of Energy (DOE) ENERGY STAR program qualification and lighting facts advocate program.

The testing report issued according to a standard format will provide:

While LM79 measures several aspects of a complete fixture, LM-80 solely measures the lumen depreciation of the LED module.

It is the Illuminating Engineering Society of North America (IESNA) approved method for taking LM-80 data and making useful LED lifetime projections. The standards apply to lifetime projection of LED package, array or module alone. The results can then be used to interpolate the lifetime of an LED source within a system (luminaire or integrated lamp) using the in-situ LED source case temperature.

There is not such a thing as testing, it is a mathematical method based on LM-80-08 collected data.
Among other things, TM-21-11 will consider:

For example, Philips Lumileds tests several of its popular LUXEON products for 10,000 hours or longer, so that our customers can claim a 60,000-hour-or-more lifetime for their products.

The method will provide a projected lifetime for the LED source or system. Life notation results will then use the following standardized nomenclature: Lp (Yk)

Three things can kill a LED. Heat, dirty power and moisture will all have detrimental effects on LED life. In reality, even if LED’s could last forever, their lumen output will diminish over time to a point where they would no longer function as a useful lighting source. We call this “lumen maintenance.” The industry has determined that the LED ceases to be a useful light source when lumen output reduces to 70% of its initial lumens. This is called L70.

L70 is a lifetime measurement criteria developed by IESNA (Illuminating Engineering Society of North America) to evaluate the useful lifetime of an LED luminaire in terms of the expected number of operating hours until the light output has diminished to 70% of initial levels. or when the lumen output is 70% of its initial output.

As LEDs do not fail and “burn out” like other light sources; instead, they gradually decrease over time until they are no longer producing useful light. It is generally established that the human eye is only sensitive to lumen depreciation of 30% or more. Therefore, L70 lifetime is defined by Illuminating Engineering Society Standard LM-80-08, entitled “IES Approved Method for Measuring Lumen Maintenance of LED Light Sources.

L70 lifetime is dependent upon many variables, such as the operating temperature, drive current, and the technology and materials used to construct the products. 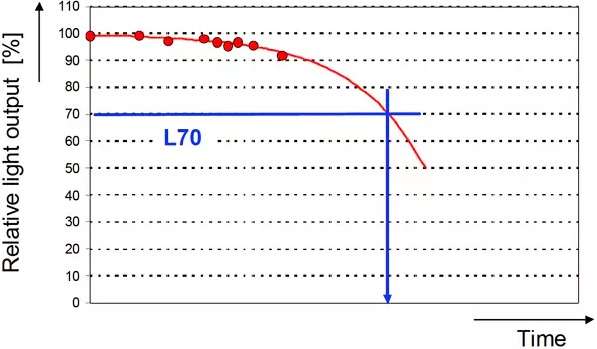 Now you get the hang of what are LM80, LM79, L70, and TM-21, and what are differences between them, but if you still have questions, just leave your comments below, we will answer any of your questions and guide you through.

Penglight sources lighting products only from recognized suppliers that are able to offer full reports for their products, if you’re looking for a professional LED sourcing agent, feel free to get in touch with us. I need an agent NOW!
What is LED Light Engine?