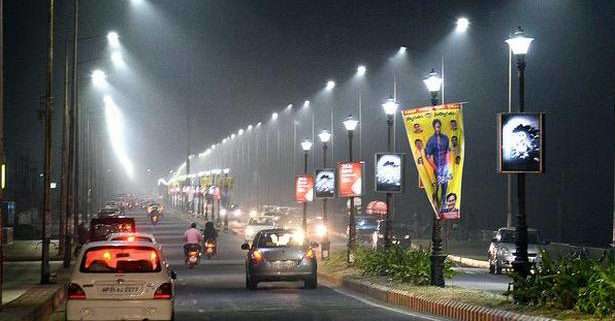 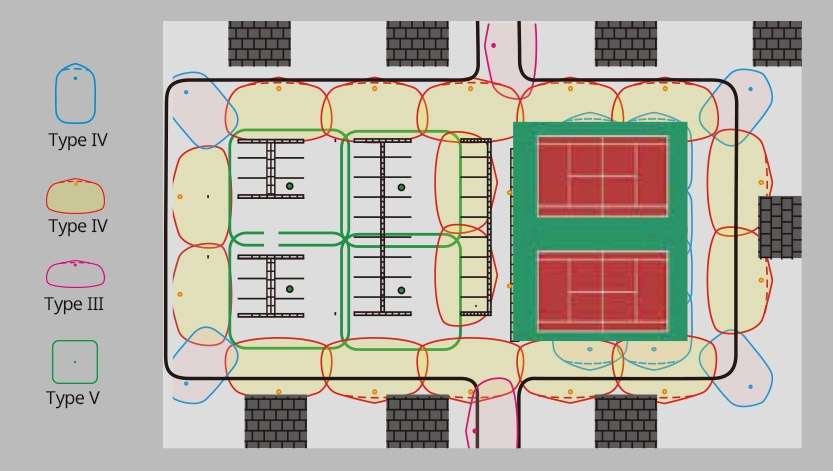 There are a lot of important factors to look at when choosing the right LED light fixture. Lumens per watt, fixture type, driver performance, color temperatures are all super important. But how about light distribution?

For lighting specifiers and contractors, it’s important, particularly for outdoor fixtures (LED Flood Light, LED Shoebox), to know the light distribution pattern and characteristics of the distribution. The shape (as well as brightness) of the area that is illuminated by the fixture will determine the effectiveness of the lighting for the intended purpose. It may also influence the number of fixtures and the spacing between the fixtures installed.

LED Light Distribution Types have two classification systems. One has been established by the Illumination Engineering Society of North America (IESNA). This system describes the shape of the area that is illuminated by the fixture. This system is used primarily for area lighting and roadway lighting applications.

IES distribution types are an essential part of planning the best lighting solutions for your site. Below are the 6 basic IES roadway beam distributions and explanations of their patterns, ranges and suitable applications:

The type I distribution is great for lighting walkways, paths, and sidewalks. This type of lighting is designed to be placed near the center of the pathway. This provides good lighting for narrower paths or roadway.

Type I is a two-way lateral distribution, with two concentrated light beams that illuminate in opposite directions.  Type I distributions have a preferred lateral width of 15 degrees and are best suited for the middle medium of a highway or road that needs illumination on both sides of traffic. This type is generally applicable to a luminaire location near the center of a roadway where the mounting height is approximately equal to the roadway width.

The type II distribution is used for wide walkways, on ramps and entrance roadways, as well as other long, narrow lighting. This type is meant for lighting larger areas and usually is located near the roadside. You’ll find this type of lighting mostly on smaller side streets or jogging paths.

Type II light distributions have a preferred lateral width of 25 degrees. They are generally applicable to luminaires located at or near the side of relatively narrow roadways, where the width of the roadway does not exceed 1.75 times the designed mounting height.

The type III distribution is meant for general roadway lighting, parking areas and other areas where a larger area of lighting is required. Type III lighting needs to be placed to the side of the area, allowing the light to project outward and fill the area. Its throw is taller than Type II but its side to side throw is shorter.

Type III light distributions have a preferred lateral width of 40 degrees. This distribution is intended for luminaires mounted at or near the side of medium width roadways or areas, where the width of the roadway or area does not exceed 2.75 times the mounting height.

The type IV distribution produces a semicircular light meant for mounting on the sides of buildings and walls. It’s best for illuminating the perimeter of parking areas and businesses. The intensity of the Type IV lighting has the same intensity at angles from 90 degrees to 270 degrees.

Type IV light distributions have a preferred lateral width of 60 degrees. This distribution is intended for side-of-road mounting and is generally used on wide roadways where the roadway width does not exceed 3.7 times the mounting height. 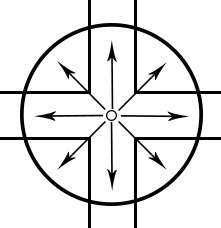 Type V produces a circular 360°distribution that has equal light distribution at all positions. This distribution has a circular symmetry of foot candles that is essentially the same at all viewing angles. It is intended for luminaire mounting at or near the center of roadways, center islands of the parkway, and intersections. Type V distribution is great for parking areas or flooding large areas of light directly in front of the fixture. It is one of the most common distribution types available today. 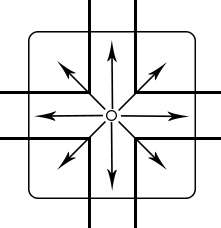 Type VS produces a square 360°distribution that has the same intensity at all angles. This distribution has a square symmetry of candlepower that is essentially the same at all lateral angles. It is intended for luminaire mounting at or near the center of roadways, center islands of the parkway, and intersections. It is also meant for large, commercial parking lot lighting as well as areas where sufficient, evenly distributed light is necessary. Type VS is used where the light pattern needs a more defined edge.

A second light distribution classification system is developed by the National Electrical Manufacturers Association (NEMA). This system is used primarily for flood lightings and sport lighting fixtures. It describes the distribution of light within the beam produced by the fixture.

The “NEMA beam spread” of a light refers to the two edges where light intensity spreads horizontal and vertical to 10% of the maximum beam intensity, and correlates to whether the light output is very narrow, very wide, or somewhere in between.

Following classifications will help you calculate the horizontal and vertical NEMA rating for your luminary’s particular beam spread, which is also an important aspect in lighting design.

To determine your luminary’s NEMA classifications for an asymmetrical beam spread, complete the following equation: 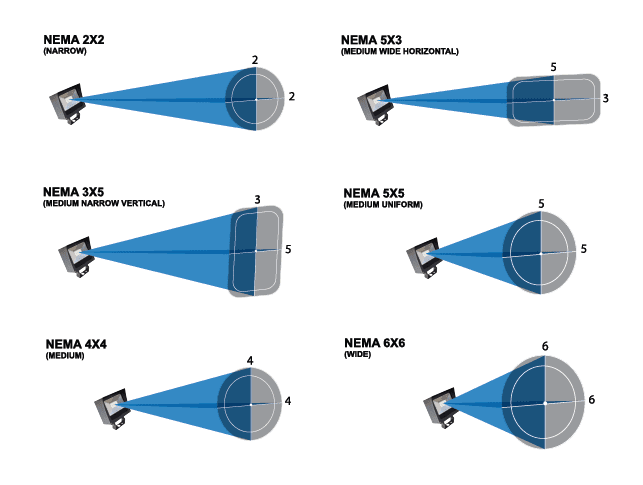 The Impact of Mounting Height on Illumination

As mentioned in the IES distribution types, mounting height plays a role in the effectiveness a luminary has on its intended target. Because LEDs cast a cone of light and are naturally directional, the beam will always dictate the area that will be illuminated.

Determining the ideal beam angle for your luminary requires knowing the distance between where the light will be mounted, and the area you want it to illuminate. A closer distance will not need a long-range narrow beam, so a wider flood beam will be best. To illuminate a target at a further distance a more narrow, farther-reaching beam is required.

The IESNA and NEMA classification designations often provided in the product datasheets from many manufacturers, such as IES files, LDT files, may give the designer enough information to determine whether or not the fixture will meet the requirements of the intended application.

Photometric reports, also available from many manufacturers, give a more detailed description of the illumination including brightness levels within the light distribution pattern.

With the above basic knowledge, it makes selecting the fixture distribution type easy. PengLight specializes in the sourcing of LED lighting systems for a variety of indoor and outdoor applications.

If you are looking for a professional sourcing agent or partner to help you with these, shoot us an email at info@penglight.com or fill out the contact form here. We offer One-stop sourcing solutions from suppliers sourcing to shipment delivery. PengLight is your trusted lighting partner! I need an agent NOW!
5 Things You Need To Know Before Choosing A Sourcing Company

4 Types Of LED Tubes: Type A, Type B, Type C And Type A+B
Scroll to top